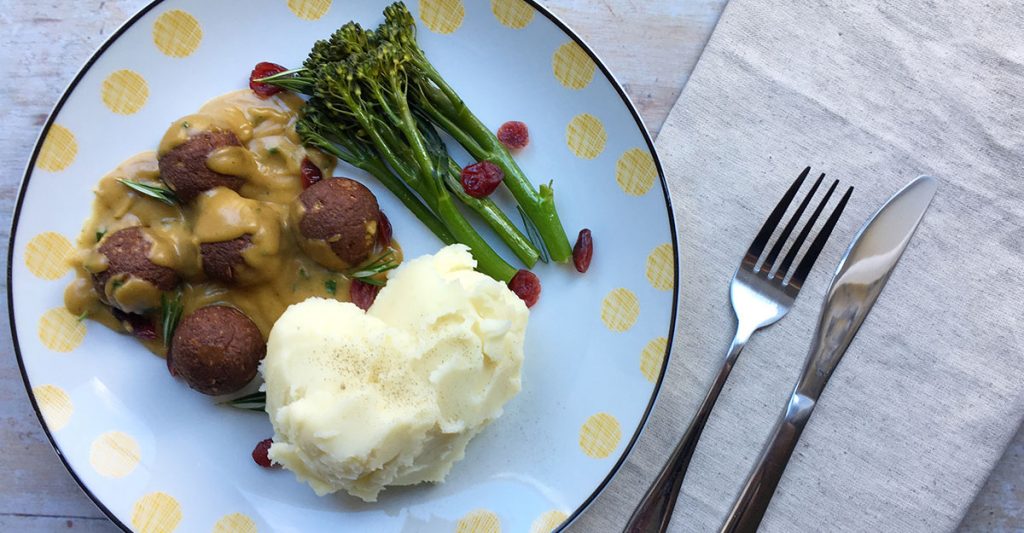 As much as I love spaghetti and meatballs, sometimes it’s good to mix it up a bit, lay off the gluten free pasta and instead have Swedish meatballs. There are little to no options in supermarkets for gluten free vegetarian meatballs which is really rubbish. You can either get gluten free ‘proper meat’ meatballs, or a vegetarian brand like Quorn having meat free meatballs that are unfortunately not gluten free too.

I decided to make my own using Quorn mince which is gluten free. Below you’ll see the ingredients used to make my gluten free vegetarian meatballs, but one thing that I wanted to mention specifically was the gluten free breadcrumbs. Earlier in the week I bought some ‘Promise’ gluten free and vegan bread that had been reduced and it was too much of a bargain to leave sitting on the supermarket shelf. I always get reduced bread and then never get round to eating it, at which point it has usually gone off, so instead of throwing money away I whizzed it up in the food processor, popped it in a container and put it in the cupboard to bring out for meals just like this!

Although sausage and mash will always be a lot of peoples go to comfort meal, Swedish meatballs with mashed potatoes and gravy is definitely one to have more often. Tenderstem broccoli is a favourite in my household, so it definitely had to be the vegetable of choice to accompany the meatballs.

-In a frying pan add finely diced onion and minced garlic to some hot oil and fry for 5-7 minutes or until lightly browned.

-Into the pan add the frozen Quorn mince and cook for a further 5 minutes until browned.

-Add in the chopped rosemary, thyme, white and black pepper and mix together.

-Allow the mince to cool for 5 minutes before putting it in a food processor and then blend for another 5 minutes until the mixture takes on a single form.

-Place the blended mixture into a large bowl and break in an egg before mixing together, add one tablespoon of breadcrumbs at a time, mixing until combined.

-Once mixed together form the meatballs with your hands, they should be roughly an inch wide, when you’ve formed the meatballs add to a lightly oiled oven proof dish, this recipe should make roughly twenty balls.

-Once you’ve made your meatballs cook in the oven on 170c fan/gas mark 5 for 20-25 minutes until browned.

Load More...Follow me on Instagram
Copyright © 2021 Juliet
We use cookies to ensure that we give you the best experience on our website. If you continue to use this site we will assume that you are happy with it.Ok